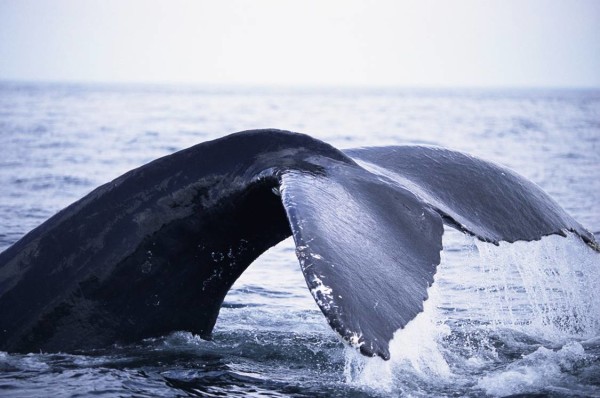 Whale watching in Ecuador has become very popular along the country’s Pacific coast from late June to early October,  when the waters off the coast of Ecuador are invaded by enormous humpback whales. By the time these ocean giants reach Ecuador’s coast, they have traveled more than 4000 miles north from the cold waters of Antarctica. They come to the warm coast of Ecuador to give birth to their calves and to mate. Their young would not be able to survive in the frigid waters of Antarctica as they are born without sufficient fat stores to protect them from the cold. So the whales migrate thousands of miles to find just the right spot to give birth or to find a mate—a  place with balmy waters and plenty of food. Ecuador’s coast fits the bill perfectly. The Humboldt Current, which runs near the coast of Ecuador, stirs up large amounts of plankton and krill, which the humpback whales, as well as many other types of whales and dolphins, require to thrive and to raise their young. An adult humpback whale can consume up to 3,000 pounds of food per day. The females are generally larger than the males as they require much strength to nurse their calves for 6 – 10 months. With a few months of binge feeding in the tropical waters of Ecuador, the whales are able to bulk up enough to tolerate the harsh climate of Antarctica for the rest of the year, and the calves put on enough blubber to survive the freezing waters of the polar regions.

year by year, but ranges somewhere between 400 and 2600. The first to arrive each year are the young males, who travel in large pods and stay fairly close to the coastline. They are the whales most often seen leaping out of the water in an effort to attract a mate. Humpback whales are about 40 – 50 feet long and weigh almost 80,000 pounds. In spite of their size and weight, they are very athletic and can breach high out of the water or smack the surface with their powerful pectoral fins, which can be up to 15 feet long. Male humpback whales are also known for their elaborate songs, which may last for 20 minutes. Sometimes they repeat their song for hours at a time. Pregnant females, slowed by their additional weight, are usually the last to arrive in Ecuadorian waters. They give birth to calves which weigh about 2,000 pounds at birth, but grow very quickly during their first few months. They grow for about ten years, and their average lifespan is about 50 years.

Whale Watching tours are available starting at $20 per person.